Making Cultural Connections Through the Kitchen

For many of the people in my community in rural Madagascar, I am the first African-Dominican they have met.

Being able to interact with an American that looks similar to them is mind-blowing to them because many of them are unaware that there are people of African descent living in the United States. Although Madagascar is one of the most unique places in the world, I have found a lot of similarities between Malagasy culture and Dominican culture. Here in Madagascar, it has been easier for me to put together Dominican dishes than it has been to put together many of my favorite American dishes. My personal theory? It’s all of this is that it is all rooted in the African umbilical cord that has brought forth many of the cultural innovations we see in many parts of the world including the Dominican Republic. 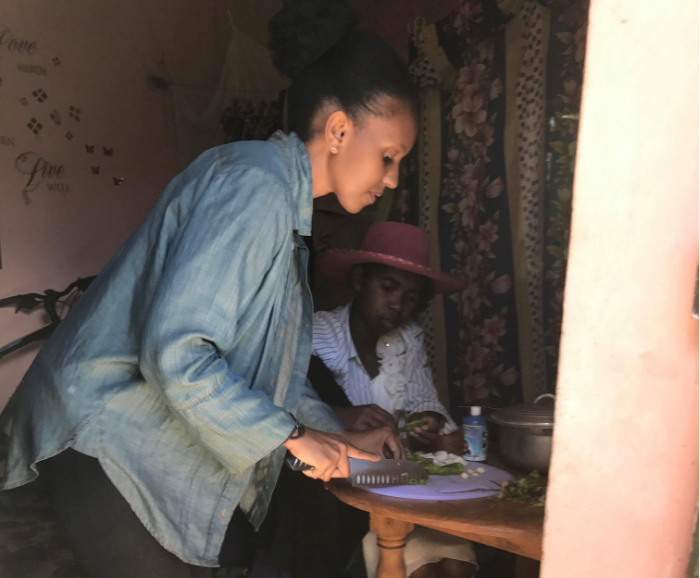 Cooking in Madagascar has jolted my creativity in ways that I could have never imagined. One of the highlights of my week includes being able to cook with and for several members of my community. On Sundays—which also happens to be our big market day in Sahambavy—I dedicate the day to experiment in the kitchen and seeing which dishes I can put together for them.

Since moving to Madagascar, I have given up on prepping for meals in the way that I used to back home in Boston. Since I live in the countryside now, I do not have access to fancy groceries stores. Nor do I have access to gigantic farmers’ markets with a wide range of options like I would in a major city such as Fianarantsoa or the capital, Antananarivo. Every day is slightly different when you are shopping in a Malagasy market. When I go to the market, I am on a quest to figure out what my next meal is going to be. I typically go to the market to first, check out what they have and what is in season. Based on what is available, I plan my meal for the day.

Some of the dishes I have been able to put together with my community include many plantain based dishes such as Tostones (savory fried plantain), Mangu (mashed plantains, usually served for breakfast), and Pastelon de platano (a version of a shepards pie made with plantain). I have also made a simpler version of Sancocho (Dominican meat stew) which is actually very similar to a version of Bestileo beef stew cooked here by the Betsileo tribe of Madagascar, called Hena Ro. I have also opened their world to a Dominican version of a beef empanada which we Dominicans call Pastelitos. Many of them compared the pastelitos to sambosa--which are very popular savory snacks in Madagascar, typically filled with ground beef and vegetables. Cassava is a very popular vegetable in both Madagascar and the Dominican Republic and I thoroughly enjoyed showing my community the different ways you can cook cassava in Dominican culture. Malagasy people are accustomed to eating cassava as a pastry dish,  for example, boiling their cassava and adding milk and sugar to make a delicious dessert called sambaika. In the Dominican Republic, we boil or fry our cassava and eat it as a savory dish by adding a onion, pepper, garlic saute on top. Many of the people in my community love it when I specifically cook Dominican food because they are learning other ways to cook many of the food they are so accustomed to eating.

Sharing Dominican cuisine with my community also serves as a great teaching opportunity in which I can teach my community about what a melting pot of cultures United States really is. I can also easily make connection regarding how incredibly diverse Madagascar is as well and how many of the immigrants that have come here have contributed to the culture and cuisine and have become a part of the nation as well. This melting pot of culture makes both nations incredibly special and unique. During many of our meals some of my Malagasy friends are unable to contain the excitement they feel because they are experiencing a cuisine that they are unfamiliar with. Often times they just smile and spend a period of time examining the dish before they actually decide to try it. The first time I made a morro de maiz (yellow rice with corn) for my host family during pre-service training they were filled with a lot of joy and immediately asked me for the recipe.

Connecting with my community through the kitchen has really helped me to integrate much faster into Malagasy culture. In the kitchen, we are able to share a lot of recipes, laughs and we also learn that we are not too different from one another. By making these meals and sharing a little bit about my Dominican heritage, I have learned that I have a lot more in common with people from this lovely African nation that I had originally realized. Food and the different variations of it is something we as human beings have in common. Amongst many things, the similarities and differences shared within all the cuisines available in this world tell us the story of survival and different communities merging together creating a brand new culture and cuisine.

Step One: Peel your plantain and place them in a pot of boiling water. (You can add a tablespoon of salt and olive oil to the water as well for added flavor) When the plantains are soft and tender take them out of the pot of boiling water and let them cool down for 5 minutes.

Step Two: While the plantains are cooking, grab a pan and add 2-3 tablespoon of olive oil and heat it up in the pan. Once oil is heated up add in the diced onions and cook it until they are tender and have a brown consistency. This will typically take 3-5 minutes.

Step Three: While the onions are cooking grab a cup and mix in 3-4 tablespoon of vinegar and salt. Once the mix is finish add it to the pan with the onions. Let it marinate for a few minutes then take it out of the pan and place in a cup and let it cool down for a few minutes.

Step Four: Grab your plantain and place in a bow add in 2-3 tablespoon of butter and with a fork smash it how you would smash mashed potatoes. (You can also add some of the water you used to boil your plantain to give the smash plantain a smoother consistency.) Once the plantains are completely smashed add in the onion olive oil vinaigrette until it is completely mixed in.

Buen Provecho! Enjoy! Or how they say here in Madagascar, Mazotoa!