School’s been in session for almost a month, and the first of our three terms will end in just a few weeks. I haven’t accomplished much as a teacher in this short time, but I’ve been experiencing what I longed for and optimistically predicted early on, when the walk to school still wracked my nerves: a gradual getting used to and an increasing sense of ease.

I teach 12 periods a week, 6 periods with S1 students and 6 periods with S2, while my colleagues teach around 35. I often feel guilty lounging in the staff room or showing up late to work when they teach 8 different lessons a day, back to back. Then again, my job is supposed to encompass much more than teaching alone, and truthfully it has. I chat at length with teachers about random topics, answer questions about literature, grammar, physics, and computers (I don’t know what I’d do without Wikipedia and Google), and converse with students while they linger outside their classrooms during free periods. It’s tacitly understood that it’s my prerogative and responsibility to support teachers and students by interacting with them in English as often as I can. Sometimes, I wander into classes whose teachers are absent in order to meet older students and help them practice English by initiating discussions or answering questions. 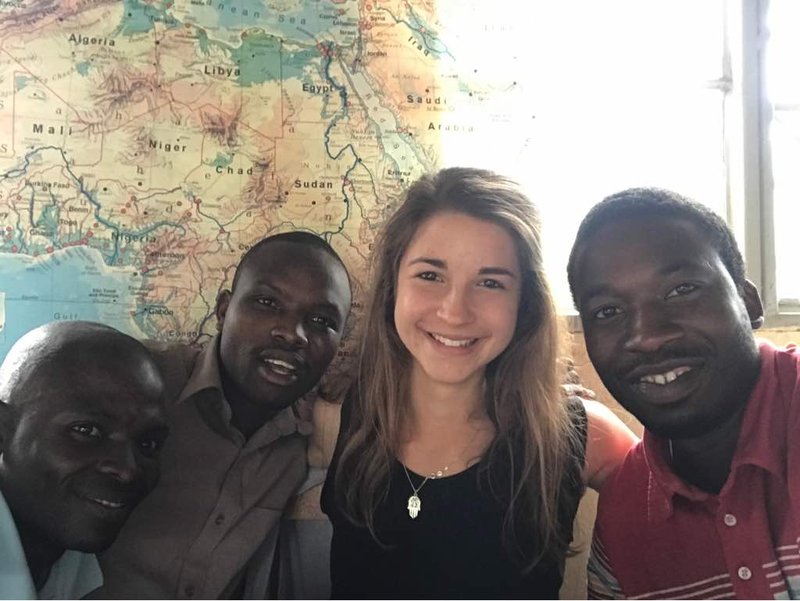 At first, leaving the teachers’ room and crossing the threshold of my classrooms took considerable courage, especially during the first week of school, when 50 to 60 students were packed into a single room before being divided into smaller sections. Despite the moment of anxiety that precedes my getting up out of my chair in the staff room and heading towards class, my perception of these students is far different now than it was in October, when I first came to visit: they no longer intimidate me because I give them the benefit of the doubt. When their manners and expressions were completely foreign to me, and I was only too familiar with my insecurity and dread as a relatively clueless English teacher, I could cast a sinister light on just about anything my students said or did in my regard. I'd shudder internally at their laughter, and wonder if I’d accidentally smeared chalk on my face. I’d wonder if they were mocking my drawling American accent or snickering at my attempts to explain new vocabulary through ridiculous, theatrical charades. I've since learned to come up with positive explanations for their giggles and whispers, shy smiles and stares, and I sincerely believe that the innocence, goodwill, and kindness I discern in my students now is accurate, at least far more accurate than anything my pessimistic, paranoid imagination previously produced. They’ve proven as much with their eager attention, participation, and work. Most days, when I stride into my classroom, I feel that the energy is good, that my students have been waiting to listen. They chuckle at my bad jokes generously and face me with silent gazes of anticipation; they crack smiles of benevolent amusement when I speak Kinyarwanda to translate, give directions, and show them that it’s fine to be vulnerable and incorrect in a new language.

Some days I still long to remain in the safety of the staff room rather than venture outside and stand in front of young crowds as they laugh for terrifying, mysterious reasons, ask probing questions, and broach semi-inappropriate topics: are you married? Do you drink beer? Yet, every day, these students manage to defeat my suspiciousness and unease. Sometimes it’s the comical, endearing height difference among students, who range from four to six feet tall, that disarms me. Sometimes it's the showmanship of students who either want to flirt with me or entertain themselves as I tactfully respond to their personal questions. It’s the earnestness of those who want to practice English after school, the way they wait for me outside the staffroom as soon as it strikes 4 pm in anticipation of our meeting. At the end of the day, when I walk upstream among students, down the steep path towards the teacher’s room that’s riddled with ill-fitted bricks, I don’t feel self-conscious and out of place among them.

I’ve grown a tougher skin, and I’ve gradually come to terms with my disconcerting freedom as an unconventional teacher. I’ve learned to improvise, to support the conversational fluency of my students in unexpected ways. During the first week of school, I went to class with the vague intention of teaching something about articles and verb tenses, but wound up dwelling on the verb ‘to try’. Before I knew it, almost all of my students were vying to share something about themselves with this verb. First, the present: “I try…”, then the past, “I tried…”, then the future, “I will try…” Previously silent students began speaking up and raising their hands; as their eyes brightened with interest, I finally began to receive non-generic answers that came from their own, personal experiences.

I’m one of two female teachers at my school; my headmaster, our dean of discipline, and 16 other teachers are all men, most of them relatively young. I’ve found it surprisingly easy to befriend them and fit into their dynamic. Each day, I better understand the way my colleagues interact, as well as the goofy, slapstick humor that generates heated debates and raucous laugher on a daily basis. They come to me for advice and for help, and include me in their banter. I’ve claimed a seat of my own, between my two closest colleagues. We have our own table, which now feels like my special territory as much as theirs. They patiently translate jokes and announcements, we discuss how hungry we are, make fun of the mountains of food they serve themselves (this joke never gets old, apparently), and laugh about stupid things. I’ve symbolically taken ownership of a cardboard box to store the few grammar books and papers I’ve accumulated thus far, following the example of other teachers in anticipation of the work I’ll give and do. Everyone else’s boxes are already overflowing after years of use.

I savor the little things that bring me into their fold as we experience them together: the four basins of beans and maize bread that we all share at lunch, the fact that I sit back serenely as my colleagues converse, without understanding a thing, yet without feeling awkwardly excluded in the midst of their animation. It’s the way one teacher greets me in Swahili every morning just to mess with me, because I never understand what he’s saying, the way another tells me about his morning jogs, and the handful of times they’ve said they feel lucky to have me. It’s how they speak to our students and guide them, it’s the compassion they have for students who struggle: those who are poor, who live far away, who are refugees. It’s the care with which they respond to students who misbehave, and the rules to which they make sure students adhere. It’s the combination of hard work and untimely, nonchalant flexibility that simultaneously characterizes their attitude towards school, somehow. It’s the way they share ideas, problems, and pens, and the fact that we constantly misplace the key to the teachers' latrine. All in all, it’s the slow embrace of this school, which feels more and more like home.

I’ve found in these teachers unlikely friends, friends I didn't expect to make because of the remarkable differences between us. But friends they really are, after spending many hours - both remarkable and not - together. They’ve stared at my tattoo and doubtfully touched its scabs, seen pictures of my family, and watched me trace the trajectory of my flight from Virginia to Rwanda four months ago. I’ve learned the names of their kids and learned what makes them laugh, which teachers prefer to stay quiet, when and why. We’ve pored over sonnets and I've finally convinced them that my hair IS naturally this color, texture, and length. We’ve discussed why I’m not married, and made fun of the ‘old’ 30-year-old bachelors among us. I’ve asked a million questions, and so have they. I shuffle in and out of classrooms just like they do, because for some reason they’ve chosen to trust me with their students, despite my inexperience, my comparative youth, and my unfamiliarity with it all. They have some kind of mellow faith in me that gives me calming determination, as well as the equally calming assurance that little by little, I’ll know what I’m doing and do it (relatively) well.