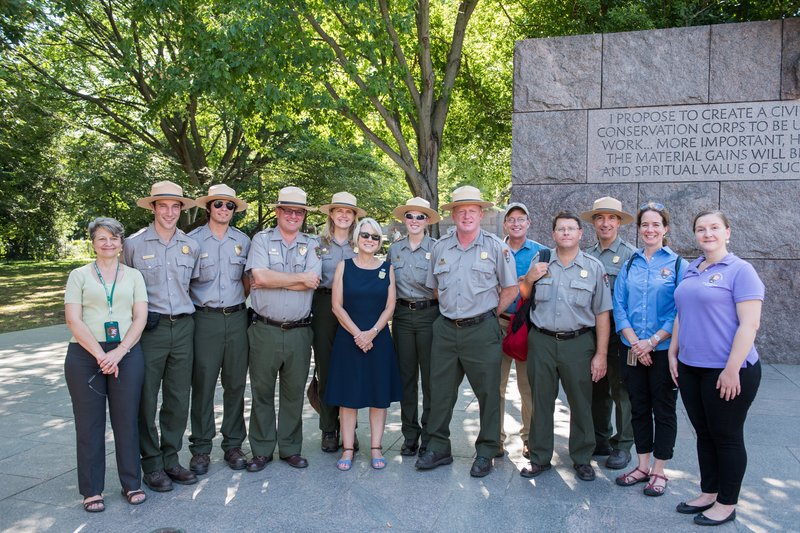 The tour of the Lincoln Memorial, Martin Luther King, Jr. Memorial and Franklin Delano Roosevelt Memorial featured historical presentations by National Mall Park Rangers that served in Peace Corps in Peru, Mongolia and China respectively. Throughout the tour, the Rangers commented on the themes of service and equality depicted at the memorials and the similarities to Peace Corps’ mission of world peace and friendship.

“What a privilege it is to celebrate the National Park Service Centennial at the National Mall, a place that honors so beautifully our nation’s history and highest ideals,” said Director Hessler-Radelet. “As a person who spends a lot of time on national park land as a private citizen, I feel indebted on a daily basis to those who came before us for the great gift they gave us in our national park system.

As part of the tour, Director Hessler-Radelet recited the ranger motto and was awarded a junior ranger badge.

About the Peace Corps: The Peace Corps sends the best and brightest Americans abroad on behalf of the United States to tackle the most pressing needs of people around the world. Volunteers work at the grassroots level to develop sustainable solutions that address challenges in education, health, economic development, agriculture, environment and youth development. Through their service, volunteers gain a unique cultural understanding and a life-long commitment to service that positions them to succeed in today's global economy. Since President John F. Kennedy established the Peace Corps in 1961, nearly 220,000 Americans of all ages have served in 140 countries worldwide. For more information, visit peacecorps.gov and follow us on Facebook and Twitter.