On a recent commute, I felt so claustrophobic I wanted to jump out the window.

Instead, I closed my eyes and tried not to think. The steel-framed wooden benches were unforgiving as I—and 150 other souls—swayed back and forth over the uneven terrain. With knees bent above the waist for the entirety of the trip, my legs had fallen asleep. Opening my eyes, I looked down at what my feet rested on, two drive shafts and the sand-crusted gear of a rear differential. I did not know why they were there, just that they were the main source of my discomfort.

Eventually we made it to Tsihombe, 18 hours after departing Fort Dauphin. Once I finally crawled out the back, I could hardly stand straight, much less walk. The intermittent humming and idling of the motor still echoed inside me. I felt shaken. I stood there for a few minutes, mindlessly staring at the green monster that had brought me here and the crowd assembled around it. Some waited for their things, others to get on for the even longer journey to Tuléar. 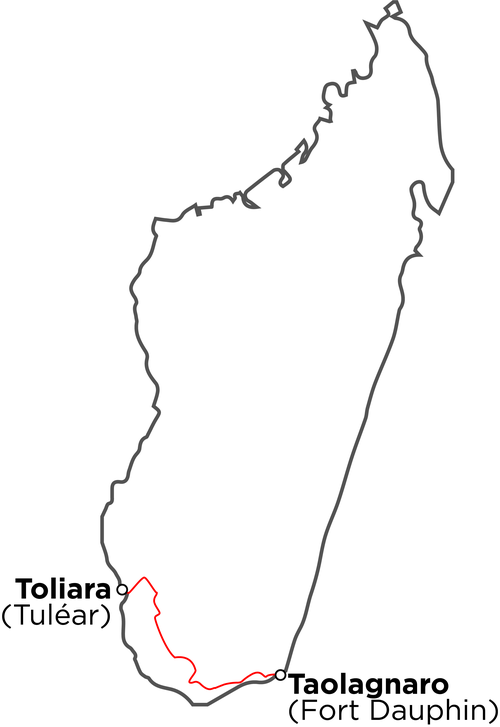 I had seen these working trucks before, on travels to the Middle East and South America—big, old, loud, and slow, they’re hard to miss. But it was not until Peace Corps that I got to ride in one.

On that first fateful encounter, aboard a 1924, I was allowed to sit in the front with the driver. The cabin design was reminiscent of the Space Age. Like the outside, most things inside were saucer shaped. You couldn’t find a right angle anywhere. Everything was metal, and painted the same color as the outer body. The dull green gave an impression of toughness and durability.

This was during site visit, on my way to Tsihombe for the very first time. Heading west from Ambovombe, the low rolling hills and big sky revealed themselves before me. I was entranced, as much by the landscape as the machine pulling me deeper into it.

The fuel lines ran out through the firewall and into the jerrycan between my legs. I glanced at the cluster, and noticed the engine redlined at 2,300 revolutions per minute. If you were to drive this like your mother’s Honda Accord, you would blow the head gasket before hitting second gear.

Every hour and a half or so we stopped to fill the radiator with water, and the jerrycan with diesel from the actual fuel tank. I took the opportunity to get out and watch the barefoot mechanics lift the hood and do their work. The engine, a 5.7L inline 6-cylinder, made up for in size what it lacked in everything else. There were no wire harnesses or electrical sensors to be seen: An engine so simple you could pull it out and make it turn just by connecting it to a battery and spraying brake cleaner into the intake manifold. The most sophisticated thing about it was the power steering.

Low revolutions, high torque, these engines were made to push weight—not move fast. Sometimes they go so slowly that it makes more sense to measure their speed in minutes per kilometer, rather than kilometers per hour. On soft, sandy roads, they can take five whole minutes to traverse a single kilometer.

Fast forward six months, and I have now had the misfortune of being a passenger—sometimes without a seat—on almost every model of what I like to call the Mercedes SandCrawler (a pun on the ubiquitous Toyota LandCruisers used by developmental aid organizations everywhere.)

Love them or hate them, these trucks, the guys who drive them, and those who keep them running are the economic backbone of the Tuléar to Fort Dauphin corridor, transporting goods and people between places otherwise only accessible by off-road SUVs or dirt bikes.


But just how did these machines end up all the way out here?

The thought came to me one day when I noticed a vinyl sticker on the door of one of these camions. It was a life-sized depiction of the head of a Tuareg man, turned sideways. Between the folds of his turban protruded a semitic nose under eyes fixated on the road ahead. Anybody could have put that sticker up, but my imagination has me inclined to believe that one of the past owners must have been a Tuareg. Still mostly nomadic, this group of Berbers have long been masters of the trans-Saharan trade routes between the Algero-Libyan frontier and Burkina Faso.

That hunch may very well be true. These trucks, built between 1959 and 1995, first gained international notoriety among oil prospectors in the 1960s for their ability to haul loads three times what the manufacturers in West Germany recommended. In addition, practically all of those exported to North Africa were green, like the majority of the ones found here. Orange models were originally exported to the Arab Gulf states.

Many of these camions, bought and sold several times over the decades, must have traversed the Sahara, the Sahel, the Congo, and the Great Rift, before finally being shipped across the Mozambique Channel to Madagascar.

With odometers rolled passed 999,999 and back to zero,

these engines need to be taken apart and rebuilt every so often—this one included. The engine suffered from a bad case of "rod knock," and the ring bearings—whose job it is to maintain just enough space for oil to fill the gaps between the piston rods, the bearings themselves, and the crankshaft—needed replaced.

When I asked them which ones, the mechanic said, "All six."

For that to happen, every cylinder in that block, plus all of the aforementioned components, must be worn out of specification due to abusive driving and a lack of lubrication. It will only be a matter of time before those new bearings get chewed up again.

In a past life, I learned that mechanical work is as much an art as it is a science. I enjoyed watching the surgeons at   work, without even as much as a torque wrench or any instruments to check clearance between moving parts.

With labor so cheap, it will continue to make more economic sense to just treat these problems symptomatically rather than to address their roots. And so, these camions will continue to chug along the sands until they fail in some remote place, and are stripped of all valuable parts and abandoned.

On my next commute to Fort Dauphin, the camion broke down just as we were about to pull clear of a single-lane bridge. A soft thud was heard as the engine revved impotently, suddenly relieved of its burden. “We were so close,” I thought to myself, and fell asleep. An hour later, I woke up in the same place. A traffic jam twenty cars deep had piled up on each side of the bridge. Too heavy to push, the truck wasn't going anywhere until it was fixed.

Feeling rested, this time I did jump out the window. It was then that I saw the driveshaft on the ground, broken at the joint where it met the rear differential. I thought back to my last commute to site, and suddenly understood.

With 20 kilometers to go before the nearest town, I grabbed my bag and started walking.